Read the following text of Paul Keating's 'Redfern Speech' (1992) and discuss the questions below in class.

Look at the images below. 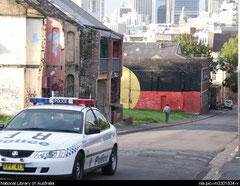 Note the names on the boats: the lifeboat dinghy is 'Mabo'. To learn about the 'Mabo' case and its importance in creating the context of Keating's speech click here or here.

Would it surprise you to learn that Paul Keating isn't the sole author of the 'Redfern speech', that Keating's political speech writer Don Watson has also been given credit as its author?

Extracts from Keating/Watson's 'Redfern speech', alongwith Prime Minister Rudd's apology to the stolen generations in parliament were used to transform Kelly and Carmody's song 'From Little Things Big Things Grow' into a new multimodal text. Click on the Youtube video to see how that story of Vincent Lingiari has been transformed.

What is the effect of this transformation? The multiple voices? Of 'projecting' images of people onto the natural and urban landscape? How might this visual textual selection support the original meaning of the Lingiari story? Does this version move you? Inspire you?

(If this video doesn't play, it may be because it has been withdrawn for copyright reasons. An interesting experiement is if you play Keating's speech and the Get UP video simultaneously.)


The Disadvantages of being White: Australia's First Aboriginal Prime Minister

‘Thank you, Australia. My fellow deadly country women, solid countrymen, and those of you who have come across the seas, we’ve boundless plains to share. I pay respect to Mother Earth and to the traditional custodians of this beautiful country. My fellow citizens, I stand here before you on this day today, humble, in my Armani suit that I picked up from Saver’s in Sydney Road for $29.95. (You just gotta know where to look, brotherrr.)…

And a plan, a plan that will take us forward as an island continent. To all of you who voted [claps]. I applaud you for getting off your moongs and making your vote count. This is your victory, Australia. This is the change Australia has chosen.

It warms my heart to think of how far we have come as a nation. And to be honest, when I found out the election result, it shocked the sh*t right out of me. First, Casey Donovan. Now Bolapin-kwabinyarn.

We have grown, from a snotty-nosed teenaged nation, to one of maturity and mutual respect. In these times of global economic struggle, we must come to rely, not on our American allies, nor our English chums, but on one another.

Currently in this country, sociological stats are reaching tragic levels.

Seventy-five percent of Australians over the age of 18 see their parents once every two years, and some have never met an aunty or an uncle. Preferred method of communication is via email or an SMS text.

I caught up with Aunty Mavis in her nursing village, and she tells me that she is happy to speak with her children as long as she doesn’t have to see the [blanks]. Quote. (Pause) Unquote…'